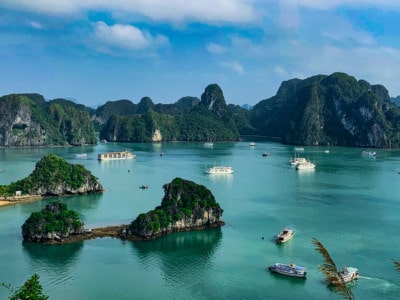 Before I booked our Halong Bay day cruise – a trip to a a UNESCO World Heritage site consisting of almost 2,000 islands of limestone rock scattered over an area of 600 square miles – I was a bit concerned. Would it be worth it just for a day? Would I be wasting my money?

All the reviews I’d read, and people I’d spoken to, said that the thing to do in Ha Long Bay is to stay overnight or for a couple of days . Only then can you fully marvel at its splendour and properly see the scenery it’s so famous for.

Others had said the trip wasn’t worth it at all. That it was overrated and not worth the long journey it took to get there, which obviously eats much more into a day-trip.

But having never been to Vietnam before, and only having a day to spare in our jam-packed itinerary, I decided that we would risk it and make up our own minds.  So we went ahead and booked a Halong Bay day cruise.

Neither of us was disappointed.  In fact, it probably wouldn’t be stretching it to say that we were blown away by it.

This was probably one of the best days of our trip. We definitely didn’t feel short-changed by only having a few hours there.

For our Halong Bay day cruise, we booked a slightly more expensive trip than some of the other ones you can find.

However, this included reaching Ha Long Bay via the new highway from Hanoi. This cuts the travel time from four hours down to around two and a half each way – something that allowed us to maximise our time.

And although it was more costly than comparable Halong Bay day cruises, it was still cheaper than booking to stay overnight.

We left Hanoi early in the morning, reaching the boat in time for our 11am departure.

After some refreshments and a briefing on our itinerary, we slowly pulled out from the harbour. We moved towards the islands of limestone rock that I’d seen in numerous photos of Halong Bay.

At this point it was cloudy and misty – something we were told is not uncommon on the bay. But any worries of not being able to see enough were quickly dispelled. The mist gradually started to lift and we realised that you sail fairly close to some of the islands.

From this distance, you get an excellent view from which to see the rocks of all shapes and sizes, some with thick scrubby vegetation blanketing them.

Some of the islands, we were told, bear a striking resemblance to living things or have become famous Vietnamese images.

For example, the “two chickens kissing” set of rocks that apparently resemble – well, two chickens kissing!  This is so iconic that all the boats seem to sail in front of these rocks. This gives you an unrivalled position from which to take your pictures.

The first part of the trip involved sailing gently around this incredible landscape, making our way further into the bay.

With the weather warming up and the sky clearing, we were able to sit on the top deck staring out at the scenery. We basically stared out in awe at what an amazing place we were lucky enough to be visiting.

Then, after around an hour and a half, we moved towards our first stop for the day: Sung Sot cave.

This first stop was a chance to step onto one of the islands and explore the caves that some of them have.

We went to Sung Sot cave, otherwise known as “Surprise Cave”. And it really was a surprise – at least the scale of it.

After a short, steep, walk uphill, we entered an absolutely gigantic cavern of stalactites, stalagmites and other rock formations. You can admire these more closely as you take the path set out through the dimly lit cave.

If you visit this cave, I’d recommend hiring a guide who’ll be able to tell you the history and legends of the cave. They will also point out the various rock formations that are said to resemble animals, including monkeys, snakes, and tigers.

The size of this cave means that you’re unlikely to be able to scan all areas yourself to discover these.

We then moved on a short distance, disembarking from our big boat to a much smaller bamboo boat. This held around a dozen people.

It was a great opportunity to get much closer to the water. You appreciate that in some areas, it’s really quite shallow.

We were steered under a rock archway, through a short tunnel, and into a small, but beautifully peaceful, lagoon.

The only sounds here were the sloshing of the water as the paddles cut it, a few birds tweeting, and the odd tourist pointing out a monkey they had spotted on a craggy rock above. Wonderful!

The final stop on our trip was Ti Top island. This is so named because of the Soviet cosmonaut, Ghermann Titov, who visited the island with President Ho Chi Minh in the 1960s. You can see a statue of him at the entrance to the harbour.

Although this stop was the last on our schedule, it was by no means least. In fact, the view you get from this island is really the cherry on top of the cake.

To experience these views, you do have to work a little. They are at the top of a very steep set of winding steps, and the climb under the hot afternoon sun that was now beating down was a little challenging.

But once you reach the summit (or the halfway point if you choose to stop here), you’ll be really glad you made the effort.

There are absolutely breathtaking views out across the bay. And you get a much clearer sense of its scale when you’re able to see the collection of islands and boats floating in between them from this height.

Just make sure you have enough film/battery life in your camera. You won’t want to miss taking dozens of photos here.

Wandering back to the boat is obviously a much easier route downhill. At the bottom, if you have time, you could take a dip in the water. Or you could stop for some refreshment on the sandy beach here.

After all of this, we returned to the boat for our ride back to base.

This was a slow and quiet journey, (we could barely hear the engines running). Sitting on the top deck of the boat in the open air gave a real feeling of peace and tranquillity which was utterly amazing.

After a pretty frenetic few days in the capital, Hanoi, this was such a contrast and one of the most relaxing 90 minutes I’ve had in a long time.

So, to answer my own question – is a Halong Bay day cruise worth it – yes, definitely.

True, it would have been great to stay longer, but if you only have a day to spare, then this shouldn’t put you off making the trip here.

A Halong Bay day cruise really is something worth booking. It’s a wonderful, captivating and magical place and one I’ll never forget.

We booked our Halong Bay day cruise with Paradise Cruise in advance through our hotel (note that this post is written independently; no payment or payment in kind has been received for citing this company).  So check with accommodation if this is something you fancy doing.

Alternatively, you can book through a tour company. For example, Get Your Guide offers this one day tour.

You can also book 2 days tours that include Ti Top island, or includes kayaking.

There are also luxury tours with transfers. 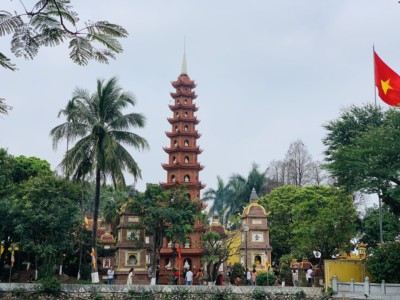 By Emma Marshall This post contains affiliate links Recently, I was lucky enough to spend nine days in Vietnam. This was a trip full of incredible sights, sounds and smells (as anyone who’s been will tell you, the food is amazing!). It allowed us to travel from the north of the country to the south,…