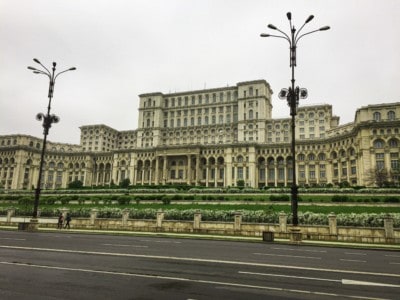 When considering which Bucharest attractions to write about, it might seem obvious to focus on Romania’s Palace of the Parliament, otherwise known as the People’s Palace.

But after a trip which took in a number of Bucharest attractions, it was hard to leave without acknowledging that this is one of the most significant things I saw.

Read on for more information on why I found this a particularly memorable Bucharest attraction.

The size of the People’s Palace

Romania’s People’s Palace is absolutely huge. It’s the second largest administrative building in the world, only top trumped by The Pentagon in the United States.  It has 1,100 rooms, and is 66,000 square metres in size.

The sheer scale of this landmark is mind boggling. And if, like us, you take a tour around it, you’ll only get to see around 5% of the lavish rooms in your hour or so in the Palace.

The history of the People’s Palace

Our tour started with the guide telling us about the history of the Palace. It was originally the idea of the then President of Romania, Nicolae Ceausescu, in the late 1970s.

Construction commenced in 1983 and was supposed to take only a few years. However, it’s actually not complete, even to this day.

Ceausescu never lived in his dream home as he was executed on Christmas Day 1989, alongside his wife Elena. This was part of a revolution (or a coup d’état depending on who you talk to) that removed him from power. It was another domino in the fall of Communism in Eastern Europe from the late 1980s onwards.

The decadence and opulence of the People’s Palace

The People’s Palace sits at the end of a long, leafy boulevard lined with beautiful flowing fountains. And inside, it was definitely the most opulent of the Bucharest attractions we visited on our short trip here.

When we walked between the different rooms, we saw the decadence at close quarters. And it wasn’t hard to understand why the sheer intricacy of the designs meant it took so much time and so much labour to construct the building.

There are beautiful tiled and carpeted floors which run to 2,200 square metres. Marble pillars reach up to ornate glass ceilings. There are also crystal chandeliers (2,800 in all) and wood panelled walls. Some of these rooms are still in use, for example the Human Rights Hall.

One room now hosts reward ceremonies and concerts. The original intention was to use it as a theatre. However, its shape meant that it was not possible to put in theatre curtains or build a useable backstage.

Look up and you can see round glass windows around the theatre. Many of these have one part which is open and not covered with glass. According to our guide these open apertures are for ventilation. Ceausescu did not want air conditioning installed for fear that this could be used to poison him.

The human stories of the People’s Palace

Notwithstanding the size, grandeur and magnificence of the building, it was the human side of the story that I found most fascinating and thought-provoking. And in some cases these were really quite tragic.

It is these stories that really brought home to me the significance of the place as we wandered through the rooms on show during the guided tour.

The stories our guide told us offered stark contrasts. They were a reminder of the difference between the world of the dictator Ceausescu and the people he ruled over.

We were told, for example, that parts of the building were built, re-built and re-built again to meet the Ceausescus’ megalomaniacal desires. This included the ornate and opulent marble staircases you see in the main hall.

According to our guide, the depth of the individual steps on the staircase were designed specifically to fit the length of Elena Ceausescu’s feet.

By contrast, we were told that thousands of workers (including political prisoners) laboured over the building of the palace. Many died from the arduous work.

In addition, approximately 7km of residential communities in the city’s Uranus area were bulldozed to provide the land for the project. This included a number of local monasteries.

Likewise, whilst some benefited from the work needed to create the building, others suffered. The project provided a fantastic opportunity for a young up-and-coming architect, Anca Petrescu. Many of the materials used were also sourced from Romania’s interior.

However, some parts of the Palace could only be constructed with the aid of residents who were forced to do the work. This included nuns who were made to painstakingly weave the heavy curtains that hang from many of the windows.

Even today the contrasts still exist. This gargantuan and self-indulgent construction overlooks central Bucharest. Only a stone’s throw away there are densely inhabited and high rise communist style blocks of flats. Many of these buildings are crumbing and exhibit a faded glory.

I found it hard not to wonder how much money it takes to maintain this iconic building in light of the fact that this is one of the poorest countries in Europe.  This said, there are signs of regeneration in the city (presumably assisted by funding since joining the EU in 2007).

This regeneration is reflected in the variety of other beautiful Bucharest attractions you can also visit. These include the lovely old town of Lipscari, and the scattering of leafy city parks (including Cismigiu public gardens and Herastreu Park).

There are also gorgeous pre-World War 2 buildings, such as the Atheneum concert hall, and the grand Triumphal Arch near to Herastreu park. Blink and you could think you were in Paris and looking at the Arc de Triomphe.

In summary, the People’s Palace is a hard place to forget (and not always for the right reasons). It’s an interesting place to visit which provides a thought provoking experience. Even if you only have a short time in Romania’s capital city, I’d recommend putting this on your list of Bucharest attractions to visit.

Bucharest attractions: how to visit the People’s Palace

We didn’t book in advance and just turned up the Palace on the day. We were lucky and managed to get the last couple of weekend tickets. However, those behind us were disappointed.

The People’s Palace is open from 9am until 5pm between March and October. Between November and February hours are more restricted (from 10am until 4pm).

Entry costs 40 lei for adults and 10 lei for children.

Don’t forget to take your passport which you have to hand in for the duration of your visit.

If you enjoy sightseeing in European cities, you might also be interested in other posts I have published: 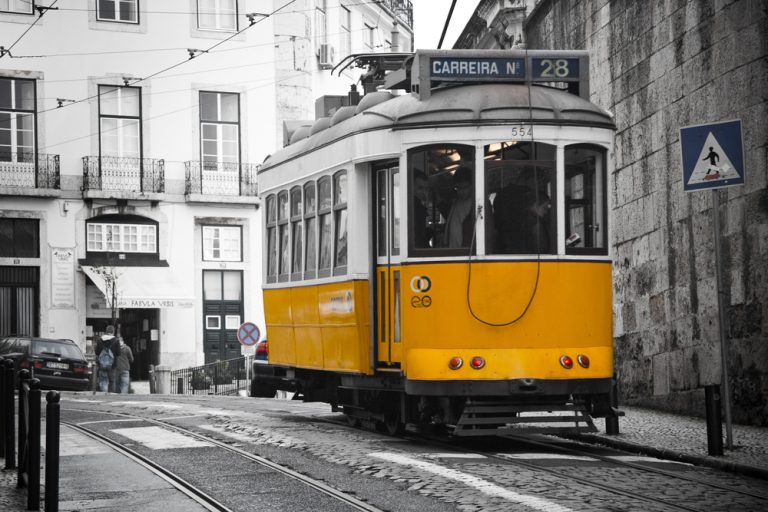 2 days in Lisbon, Portugal’s capital, is just enough time to get a feel for this captivating city. With its imperial architectural splendour, it is a city that harks back to a bygone age. Its elegant, tree-lined avenues and narrow cobbled side streets look almost as they did after the historic centre was rebuilt following… 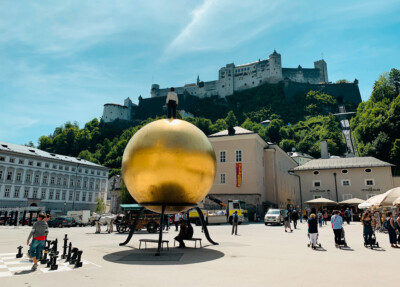 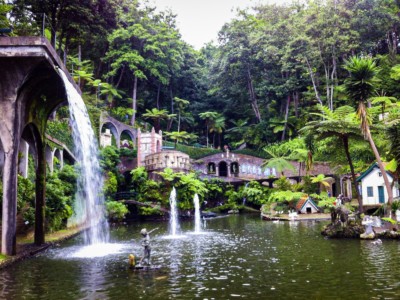 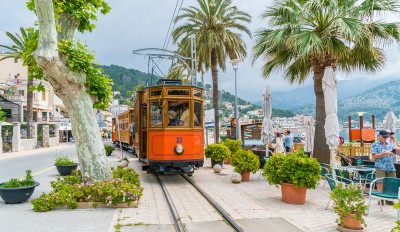 By Emma Marshall “Shall I pick one?” I thought as the open window of the Soller railway train – or “Orange Express Majorca” – moved slowly past a dense copse of orange trees.  They were within arm’s reach, the trees buckling under the weight of the brightly coloured fruit.  The sight of these were no… 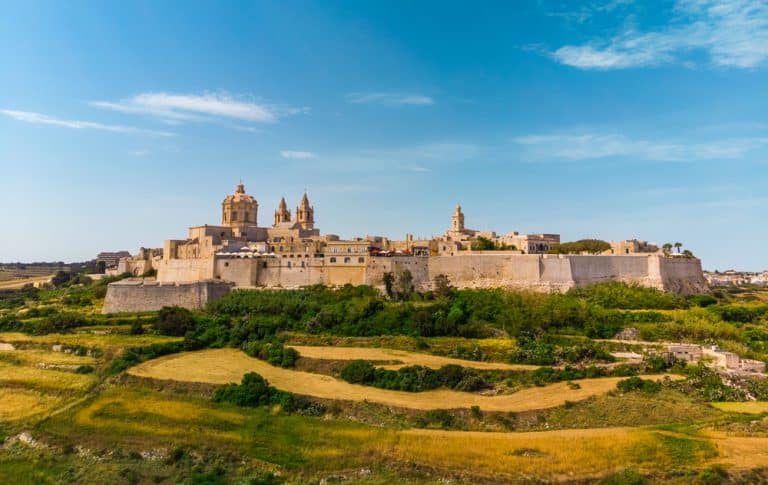 For the fifth smallest country in Europe, there is a remarkably large number of things to do in Malta.  It is an island rich in culture and history, a place with endless opportunities for sightseeing, and where you can explore beautiful beaches, go island hopping and sample some excellent food. It’s a perfect choice for… 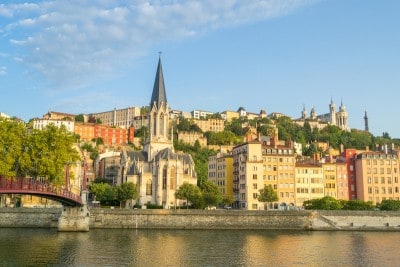